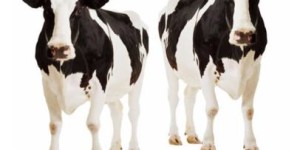 Does the FDA and the USDA allow us to eat cloned animals and cloned animal milk? Most people think it is strange if we are eating meat and drinking milk from a cloned animal.  The answer is “Yes” and that there are no requirements for food and products from cloned animals to be labeled as of yet.

Originally, The Food and Drug Administration (FDA) originally announced back in Dec. 26, 2006, that meat from cloned cows, goats (and their milk) along with pigs are safe to eat.  However, a study by International Food Information Council in 2006 found that 54 percent of Americans did not want cloned food to arrive in the marketplace [source: Kaplan].

­By definition, a cloned animal is an exact genetic copy of its “parent.”

The process of cloning looks like this: say, a pig — you take a donor egg from a female pig and remove the egg’s nucleus, where the genetic information lives. then inserted in its place is the nucleus of a cell taken from another pig into the egg. The egg now contains the latter pig’s DNA. An electric current then stimulates the egg to begin growing, and the result is a genetic copy, or clone, of that pig.

On Jan. 15, 2008, the FDA finalized its safety ruling, allowing the sale of meat and milk products from the offspring of cloned animals. These offspring aren’t considered clones since their cloned parents bred in the natural way. The U.S. Department of Agriculture (USDA) also requested that manufacturers refrain from selling products from actual cloned animals to allow the market to catch up to the technology. Cloning costs about $15,000 for a single cow [source: Pacella].

­The FDA announced in September 2008 that cloned meat and milk may already be in the nation’s food supply. What can the consumer do?

Livestock cloning has been going on since at least 1998. In 2003, the FDA issued a voluntary ban on food products from cloned animals and their offspring until the organization could examine the safety issues. According to scientists who researched cloned livestock for the FDA, no distinguishable difference exists between the products of clones and those of non-clones.

The milk, meat and other animal products th­at were on store shelves before the 2003 ban were never labeled as coming from clones, and the later ban relied on voluntary self-regulation within the livestock industry. So, if meat or milk from cloned animals doesn’t whet your appetite, how can you avoid bringing it home?

Due to the high cost of cloning, cloned animals are primarily used for breeding purposes. For instance, a milk supplier would clone the cow that produces the most milk out of the herd and then use those clones to breed more of the same. The farmer would sell the milk of those offspring, not of the clones themselves, since they would be more valuable as breeders. As of March 2008, the USDA estimated that there were around 600 cloned animals used for breeding in the United States [source: Knight].

But ­the FDA doesn’t require special cloned meat labeling for food manufacturers that sell meat and milk from cloned offspring. Also, there’s no scientific test to determine whether a meat or milk product came from cloned animal lineage. That ambiguity is one of the primary concerns voiced by consumer advocacy groups and people who oppose the FDA’s motion. At this point, it’s up to the manufacturers to disclose as much — or as little — as they wish. On the flip side, that may mean that we could see more non-cloned types of food labels from companies looking to capitalize on the public’s general distrust of eating cloned meat.

Due to public concern, at least 13 state legislatures have introduced bills to require some type of identification on cloned animal products [source: Gogoi]. If the measures pass, they could serve a blow to the livestock and biotechnology industries that see cloning as the future of meat production. However, since scientists can’t tell the difference between cloned and non-cloned animal meat, enforcing these potential laws would be difficult as well.

­While this debate continues in the United States, it may soon echo abroad. Following the FDA’s 2008 ruling, the European Food Safety Authority tentatively concurred that cloned food is safe for consumption but has yet to approve its sale in the European Union.

Sources – edited and revised from “How Stuff Works”