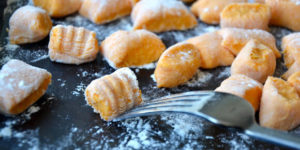 October 9, 2016October 10, 2016
[text-box] Gnocchi is fun to make. Its from North Italy. And several shapes are acceptable. Plus there are many sauces that go with gnocchi.

Get the family together for this activity, it can be done in a short amount of time and there is plenty of satisfaction.

The secret to a light gnocchi is to use as little flour as possible. The exact amount can vary based on the humidity of your kitchen. Also the amount of water in the type of potato you use. The drier you can keep the potatoes, the less flour you will need, the lighter the gnocchi.

I recommend baking the potatoes, rather than boil. Also rice the potatoes by placing them through a ricer. A ricer is a press that forces the potatoes through allowing for extra moisture to evaporate quickly. This also makes for fluffier mashed potatoes if you are making those.

Allow the riced potatoes to come to room temperature before combining with the flour. Potatoes tend to sweat as they cool down.

For our gluten-free friends, this is a great opportunity to introduce healthful grains such as “Buckwheat“. The word is a complete error in translation because buckwheat is not a grain, its actually a seed. However, the plant may resemble wheat.

Buckwheat is anciently used as a grain, particularly adapted to cultivation in colder climates and high altitude. Buckwheat has a short growing season compared to other grains. It was a very common crop in Northeastern Italy and across the globe in the 18th and 19th century.

Cultivation declined sharply in the 20th century when the use of nitrogen fertilizer came into vogue. Corn and wheat respond strongly. This brought down the cost of making corn and wheat products and introducing them into the American food chain. This caused other products like buckwheat to almost disappear completely from our stores. Buckwheat returned in response to emerging and epidemic American food allergies in the late 1990s.

Regardless of the gnocchi you are making, add the flour or flour like product, the salt and mix well. Add the egg, and quickly knead everything together into a sticky dough, working as quickly as possible.

The secret to tender, light gnocchi is add as little flour as possible.

To test to see if there is enough elasticity in the dough fill a small pan with water and bring to a boil. This is the Italian way of testing the texture of your gnocchi.

[ordered title=”Did I use enough flour?”] [line]Take a small piece of dough, about the size of a grape, and drop it into the boiling water. It will cook for about a minute, and then should rise to the surface. Let it cook for one more minute, then remove it from the water.[/line] [line]If, rather than sink and then rise, it breaks apart, add a bit more flour to the dough and knead again. Once you get a test one that sinks and then rises without falling apart, you are ready to move on to the next step. The results sought after are a test gnocchi that is cooked through, but still soft and light.[/line] [line]Dust the counter with buckwheat flour. Divide the dough into 6 equally sized pieces. Take one of the pieces and place it on the floured counter top. Using the palms of your hands, roll the piece out into a 1/2 inch thick log, which will be about 12 inches long. Cut the log into 1-inch lengths, and place the individual gnocchi onto a sheet pan that has been dusted with flour. Repeat with the remaining pieces of dough.[/line] [/ordered] [/text-box]